And now for something completely different

This year’s EOTY (end of the year) bike ride started at Guwahati, Assam, and ended at Miao, Arunachal Pradesh. The route (Guwahati, Mangaldoi, Dekhiajuli, Pabhoi, Majuli, Sibasagar, the coaltown of Margarita, Miao, followed by a visit to Namdapha Tiger Reserve) stretched along the north bank of the Brahmaputra till the river island of Majuli and then crossed over to the south bank before entering Arunachal. Moving from west to east, Assam seemed to change from day to day. The profile of the local population gradually changed (from Bengali influences to Muslim dominated to Axomiya hindus to a greater tribal composition as one neared the Arunachal border). As did the houses, diets and local markets.

Some pictures. That snap you see on top left is the endangered Pygmy Hog. The beneficiary of what is described by my biologist friends as India’s only successful wildlife reintroduction programme. The two snaps below it were taken as we (three friends and me) pedalled towards Majuli. The snap of haystacks in the middle was taken on the second day — en route to Orang National Park. The snap on the top right? That is the sort of house we saw in the initial days — houses with attached fishponds.

The snap of a bridge, mustard fields and the setting sun? That was taken en route to the ferry for Majuli (which stars in the next snap). The two misty snaps were taken the next morning in Majuli as we cycled to catch a ferry from Majuli’s eastern bank. That was a morning to remember — us cycling on the fine sand of the Brahmaputra’s riverbed, with the mist swallowing up everything beyond 20 or so metres. The next snap, of my sand encrusted cycle, was taken after this ride.

Cycling beyond Sibasagar, Assam. We met this Bihar migrant working in a bakery at the town. He was off to hawk the day’s production from his baker’s cycle cart. 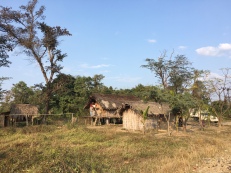 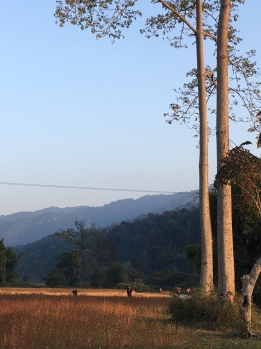 That shack you see was a place where we breakfasted shortly after getting off the ferry. The gent wearing the adidas sweatshirt was running that eatery along with his wife. The two people below him? We met them, at another tea-stall, on the way out of Sibasagar. Ditto for the young man from Bihar selling cakes, puffs and pastries from his cart. Around here, the houses had changed. We saw fewer houses with ponds. Most houses had a canal running out in front with these cane bridges over them.

Then came Margarita. And that is where the next set of snaps — like that of the vegetable sellers, including the one with the coal mine in the background — were taken. Around here, the houses (and the profile of the local population) had changed yet again. And then, we entered Miao. The vertical snap you see was taken inside Namdapha Tiger Reserve. The rest were taken in local markets in this part of Arunachal — the first set of women are selling, among other things, local turmeric. Rs 10 for each page’s worth. In the snap to the right, you will see what looks like white cookies in plastic bags. That is yeast, using for making local rice beer called Loh-Paani.

In the final snap, the woman holding up that newspaper belongs to the Apatani tribe — look at the facial tattoos. She was eating jalebis when I took that snap. This, of course, is little more than a random sampling of snaps. That week of cycling left us with more impressions than what a quickly-written blogpost can handle.

PS: It was a good break. No email. The phone on DND. The brain caught a break from its usual ADD, spending hours at a stretch cycling or reading. Two notable books from this trip: Jon Prochnau on the adversarial reportage by David Halberstam, Neil Sheehan, Mal Browne and others during the early days of the American quagmire in Vietnam. And another on Aristotle’s staggeringly accurate (and sweeping) effort to make sense of life’s diversity on Earth.

PS: You will have to forgive me the multiple snaps of my cycle — my Surly Cross-Check is tough and beautiful. And I keep photographing it.

PS: And here is a blogpost on the trip by my fellow cyclist Vidya Athreya.

One response to “And now for something completely different”