Black of grackles glints purple as, wheeling in sun-glare,
The flock splays away to pepper the blueness of distance.
Soon they are lost in the tracklessness of air.
I watch them go. I stand in my trance.
Another year gone…
(“Grackles, Goodbye“, Robert Penn Warren)

and so 2012 crawled to an end. its final days were bitter and angry. like most of my friends, i have been badly shaken by the brutality of the attack on that 23 year old paramedic student. this anger was later tinged with disbelief when the government decided to shift that girl, who was already in a very critical state, to a singapore hospital for organ transplants even though it was very clear that an organ transplant could not be carried out any time soon. the government behaved egregiously in other ways as well. first, it teargassed and lathicharged students amassing to protest against the rape. later, just after the girl had passed away, it placed curbs on those assembling to mourn her death. metro stations in central delhi were closed. people seeking to exit from the connaught place metro station, the main interchange point for delhi, were stopped by cops who wanted to know where they wanted to go, if they had any proof supporting that claim. #democracy #fail

if there is any saving grace in this whole sordid saga, it is that attention has again been focused on the question of violence against women, and how to ensure their safety.

however, true to form, most of the suggestions have bordered on the insane. a senior cop made his cellphone number public saying folks in distress can call him anytime. the media has fixated on fast-track courts, chemical castration for rapists and other penal, deterrent measures.

two stories in today’s economic times, by the TOI’s kim arora and me, look at the question of women’s safety from a slightly different angle. in 2005, the delhi police launched a programme called parivartan. this sought to reduce the incidence of rape in the capital by 25% each year. despite some early successes, it was not scaled up. organisational factors — like an inability to institutionalise promising new initiatives, lack of funding, etc — were to blame.

the second story takes a closer look at the context in which parivartan was conceptualised, the context indeed in which the delhi police continues to work. this story is more for the uninitiated souls like me — about the context of patriarchy and poor legal frameworks in which complaints of rape and violence against women are processed.

as such, parivartan is an important thing to study. at a time when the country is talking about answers, it is useful to look at its nuanced approach to the problem of violence against women. also, it ran aground for a mix of organisational and legal reasons. it might be an idea to try and avoid the pitfalls that nobbled this earlier, well-meaning programme. 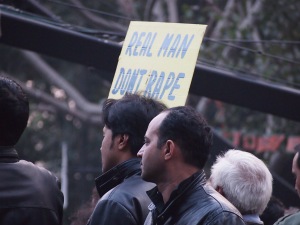